Wigan Diggers digging! Photo of the symbolic digging re-enactment which took place at this year’s Diggers’ Festival, close to The Face of Wigan statue. 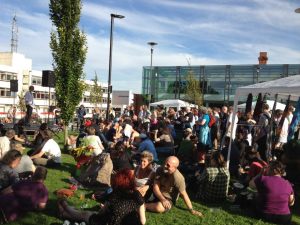 Organisers are pleased to report that Saturday’s 2nd Diggers’ Fest in Wigan, celebrating locally born Gerrard Winstanley and Britain’s first Socialists, known as ‘The Diggers’, was a resounding success, with some of the best weather of the year helping to swell the crowd to around 2000 over the course of the day.

Attila The Stockbroker was top of a bill of 24 separate acts including two Socialist choirs, three top radical poets, three local bands, two duos and two professional actors. The Festival also included a film showing, exhibition, audio visual presentation, and a beer tent for which we commissioned our own Wigan brewed ‘Gerrard Winstanley’ and ‘Diggers 1649’ ales.

John Graham Davies played the part of Gerrard Winstanley at a symbolic re-enactment of the digging at St. George’s Hill in Surrey in 1649 by Winstanley and his ‘True Leveller’ supporters, which gained them their nickname ‘The Diggers’, and where the name of the Festival comes from.

John Graham Davies playing the part of Winstanley. Explaining the work ‘The Diggers’ are going about, his monologue concludes with the famous quotation “Words and writing are all nothing and must die, for action is the life of all and if thous dost not act thou dost nothing”.

They famously proclaimed: “The Earth was made to be a common treasury for all, irrespective of person”.

They also called for universal suffrage, annual election and replacement of all officials, the abolition of private ownership and the “thieving art of buying and selling”, plus the establishment of a what in modern terms might be described as a vision of a truly democratic, ‘communistic’ ‘Commonwealth’ (as opposed to the sham Commonwealth of Cromwell).
In the one Winstanley advocated, everyone would be regarded as being equal and as members of the same family, and the principle of ‘each according to their ability, each according to their need’ would apply. 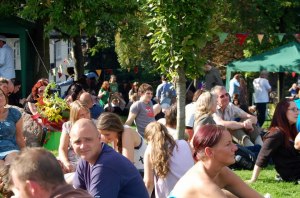 The Festival had a friendly concert in the park atmosphere assisted by the glorious afternoon sunshine.

The feedback the organisers have received both during and after the festival is tremendous, and ranges from “brilliant”, “great”, and “fantastic” to “the best day ever”.
Here are a just a few examples from our Facebook event page, there are many, many more:

Bessie Smith
Well – what an absolutely BELTIN’ day! Fanbloodytastic from start to finish. Thanks so much to the committee and everyone who contributed to make it a proper day to remember. It really couldn’t have gone any better. Rarrr!!

Stephanie Fry
It was wonderful – educational, informative, funny, loud and blessed with some of the nicest weather we’ve had this summer. Seriously well done to all the people who must’ve worked damn hard to make it happen 😀

Tracy Bucknell
What an absolutly brilliant day :)) beautiful weather topped off with great artists and friendly faces… fantastic :)) i look forward to next year

Caroline Eyre
This was the best day ever,enjoyed every second and met up with some lovely people. Thank you to all involved x

Fabulous day. Big well done and thank you to all the organisers that made it possible. Such an important event to commemorate, and what a great way to do it.
Here are some photographs from the day:

LINKS TO LOTS OF PHOTOS ON OUR FACEBOOK PAGE at: https://www.facebook.com/WiganDiggersFestival