Come and join on Saturday for the biggest and best annual get together of North West Trades Unionists, Socialists and other radicals from across the Left at this year’s Wigan Diggers’ Festival. The FREE all day event starts at 11.30am at our usual Wiend venue in Wigan town centre with a symbolic re-enactment of the digging undertaken by Gerrard Winstanley and his companions at St. George’s Hill, near Weybridge in Surrey in 1649, in which the Wigan born radical outlines his views on the common ownership of land and conception of the world as a “common treasury for all”.

Festival goers can expect not only some decent weather, as you can see from today’s BBC Forecast, but a day crammed packed with stuff to suit everyone including live music and poetry across two stages, more than 50 stalls, British and Caribbean, vegan and conventional catering, plus an excellent choice of real ales, fruit beers, traditional ciders and award winning lagers.

GFTU General Secretary Doug Nicholls will also be giving a talk in the Parish Church from 12.30pm to 2.00pm on “The Wisdom of Winstanley’s Words”

Quite definitely our biggest and best so far, this year’s Wigan Diggers’ Festival was a resounding success. Here are some photos of the day’s proceeding (courtesy of Al Balmer) which saw our best ever line up of live entertainment, five excellent educational talks, two puppet shows, over 60 stalls and a terrific speech from this year’s Gerrard Winstanley Spade Award recipient, veteran Socialist fim director Ken Loach (see below). The weather, food and beer were pretty good too.

Video of Ken Loach speaking at the Festival. What a brilliant speech.

This year’s first leaflet artwork. More information, including details of all the performers to follow: 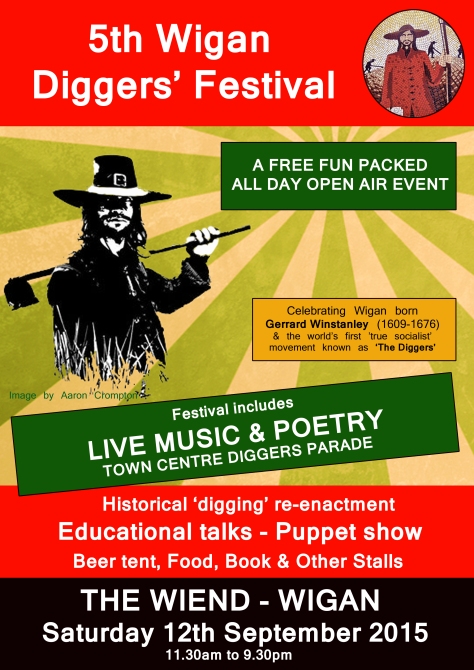 If you would like to book a stall for your organisation, community group, co-operative or small business at this year’s Festival then please download the linked file, complete as appropriate, and return to the address provided.

Confirmed yesterday, with Wigan’s Town Centre Manager, the gardens adjacent to The Wiend, containing the ‘Face of Wigan’ statue, and the forecourt of the new Wigan Life Centre (shown on left), unofficially renamed by us “Gerrard Winstanley Place”, will again be the site of this year’s 3rd WIGAN DIGGERS’ FESTIVAL which will take place on Saturday 7th September.

The planning of this year’s event is still in its early stages but PLEASE PUT THIS DATE IN YOUR DIARY NOW! See map below for exact location in Wigan town centre. 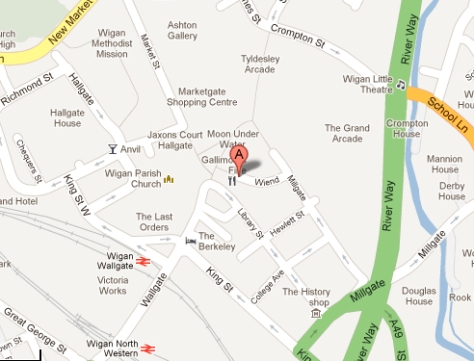 The FREE Annual Open Air Festival celebrates, via the medium of poetry, music and song, film and a range of other activities, the life and ideas of Wigan born and bred Gerrard Winstanley (1609-1676) and the 17th Century ‘Diggers’ movement he became the inspirational theorist and spokesperson of.

Also known as the ‘True Levellers’, the Diggers were one of the first truly egalitarian political movements of the poor and propertyless anywhere in the World, and the first to argue for full equality of men and women. Winstanley and they famously asserted: “The World was made a common treasury for all!” 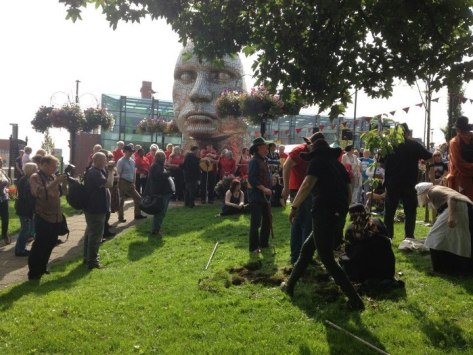 Last year’s festival was a resounding success, with some of the best weather of the year helping to swell the crowd to around 2000 over the course of the day.

We are hopeful Attila and actor John Graham Davies, who played the part of Gerrard Winstanley, in a symbolic re-enactment of the digging and sowing (which gave the Digger’s their nickname) at St, George’s Hill near Weybridge in Surrey in 1649 (seen above), will perform once again at this year’s festival, along with some of the most popular acts from last year’s event, and some new and more well known ones as well.

Last year’s Festival also included a film showing, exhibition, audio visual presentation, and a beer tent for which we commissioned our own Wigan brewed ‘Gerrard Winstanley’ and ‘Diggers 1649′ ales, both of which proved very popular and we are  hopeful will be available again this year.

In the meantime why not check out some of the many photos from last year’s event on our Festival Photos page: https://wigandiggersfestival.org/festival-photos-other-media/ and on our Facebook page at: https://www.facebook.com/WiganDiggersFestival

The final details of the programme of the 2nd Wigan Diggers’ Festival have been unveiled today. They outline a jammed packed day of live entertainment over two stages featuring 23 separate acts, a film showing, two audio visual presentations, a symbolic, part theatrical ‘digging re-enactment’ and tree planting ceremony, with a professional actor playing the part of Wigan born pioneer Socialist Gerrard Winstanley who along with the 17th Century Diggers’ movement he was the principal spokesperson of, is the main focus of the entire day’s festivies.

In addition to that, there will also be over 30 food, community, political and other stalls not least of which an ‘OccuPie Wigan’ beer tent offering two locally brewed special commemorative ales to Festival goers, namely Prospect’s Diggers 1649 Ale and Allgates’ Gerrard Winstanley Ale.

There will also be a town centre Diggers’ Parade, and a mass singing during the digging re-enactment, led by the Liverpool Socialist Singers, of the some say, Gerrard Winstanley penned “Diggers’ Song” and Leon Rosselson’s “A World Turned Upside Down”, made famous by Billy Bragg in the 1980s, all of which will take place in The Wiend area, in Wigan town centre between 11.30am and noon.

11.35am – 11.45am   Digging and Sowing re-enactment in Millgate/The Wiend area. Actor John Graham Davies will play the part of Wigan born Diggers’ spokesperson Gerrard Winstanley during the re-enactment. Also, singing of “The Diggers’ Song” led by The Liverpool Socialist Singers.

12.15pm – 12.45pm      STAGE ONE: GLASS HEADS – a guitar based four piece who hail from Wigan. They draw upon diverse influences ranging from Sex Pistols to dub reggae and hip hop to flamenco guitar!

1.05pm – 1.35pm    STAGE ONE: PAULINE BLACKBURN – is a singer/songwriter/acoustic guitarist from Wigan who has strong roots in the folk scene. She has a strong soulful voice and sings from the heart.

1.40pm – 1.55pm    STAGE TWO: Dorothy Fryman & Monologue John Bartley aka Song & Story – Veteran Socialist Dorothy & ‘Keep the Change Bob” gave us an impromptu performance at last year’s festival with poems and songs written by Dorothy and her late husband. They went down a storm and are back this year.

1.55pm – 2.25pm   STAGE ONE: ALUN PARRY – is one of Liverpool’s leading acoustic performers and songwriters. He says on his Blog he’s proud to be playing at the festival, and so are we, as he’s also one of the North West’s foremost radical singers and entertainers.

2.30pm – 2.45pm   STAGE TWO: SCOTTY HERTZ from Canada via Glasgow can regularly be found at picket lines and grassroots benefits or anywhere coffee fuelled acoustic punk is welcomed. Wants to organise a Diggers’ Festival in Canada.

2.45pm – 3.00pm   STAGE ONE: MICHAEL BUCHANAN – is a radical Northants based poet and was a hit performer at this year’s Wellingborough Diggers’ Festival. We thought he was so good in fact we invited him to ours. We think you’ll like him!

3.00pm – 3.30pm   STAGE ONE: JOHN THE BAPTIST & THE 2ND COMING – Sure to be controversial “Prog Krautrock” blues band with smatterings of asteral jazz.

4.00pm – 4.30pm   STAGE ONE: CLAIRE MOONEY – Manchester based Claire Mooney was the most popular performer at last year’s Festival. She is a well known ‘mover and shaker amongst the North West’s LGBT scene’, and co-hosts BBC Radio Manchester’s LGBT show

4.30pm – 4.45pm   STAGE TWO: LAURA TAYLOR – has been writing and performing poetry for 2 years, and has finally found a space in which to air her grievances with authority. She describes herself as a proud Northerner, social misfit, and all-round shirker.

4.45pm – 5.00pm   STAGE ONE: SOLOMON SCRIBBLE – is a talented ‘performance poet’ who comes from Blackpool. He writes and performs garish pieces about popular culture, politics and his friends. Also covers topics as strange as wasps and boxers.

5.00pm – 5.30pm   STAGE ONE: THE DEAD SHORES – are a 4-piece rock band from Wigan. They are four likely Lancashire lads with a tremendous humour and an infectious sound. Their lyrics are laced with a working-class wit and edginess.

5.30pm – 5.45pm    STAGE TWO: PLANET AL – alias Alan Sinclair is a locally based acoustic singer/songwriter formerly with bands THC and The Volunteers. Mostly performs is own material which is likened to Neil Young & Roy Harper’s.

5.45pm – 6.15pm   STAGE ONE: BOB KETTLE – plays Guitar/Mandolin/Harmonica as a solo artist, and is an accomplished singer/songwriter. He is also a member of the folk-rock band ‘Merry Hell’, who are currently enjoying considerable success in the music world.

6.15pm – 6.30pm   STAGE TWO: CLASS ACTIONS – performed at our first festival and are a Salford based duo, renown for their aggressive dance/rap fusion and hard hitting social commentary. Their M 4 Maggie is always a favourite.

6.45pm – 7.15pm   STAGE ONE: KIERAN DEVLIN – is Wigan based front man for Wallgate Circus. He performed at last year’s festival and is back at this year’s by popular demand.

7.15pm – 8.00pm   STAGE ONE: ATTILA THE STOCKBROKER – punk poet, and a folk punk musician and songwriter. He has performed over 2,700 concerts, including every Glastonbury Festival since 1983. 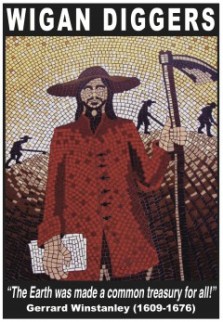